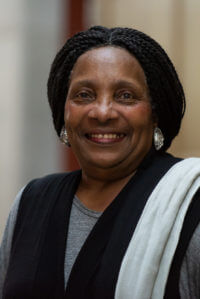 Flint Community Advisory Board member Ms. Ella Greene-Moton, has been elected President-Elect of the American Public Health Association! This is an amazing accomplishment because we believe she is the only community-based advocate elected to this position. Ms. Ella Greene-Moton was born in the Mississippi Delta on a cotton plantation and has an extensive background in Public Health Advocacy, Public Health Policy, Community-Based Participatory Research (CBPR), and programming, spanning over the past forty-plus (40+) years in the City of Flint and surrounding areas. In addition, her specific efforts in public health have focused on providing awareness at the community level, developing and elevating the community voice, and advocating for community inclusiveness at the State and National Levels. Her areas of expertise include facilitating community/academic/practice partnership building and sustainability; developing, managing, and evaluating community-based projects; training programs for graduate students and community members; and partnering with community-based organizations, schools, and public health agencies. In her local role, she is a member of the Community Based Organization Partners (CBOP) and serves as the Administrator for CBOP’s Community Ethics Review Board. She serves as the Michigan Affiliate Representative to the Governing Council of APHA. And was also a Fellow with the National Leadership Academy for the Public’s Health for the past two years.

From a cotton plantation to APHA President, that is quite an extraordinary journey, and MCUAAAR extends its hearty congratulations to Ms. Greene-Moton. This video interview provides a great introduction to the new APHA President-Elect. See the entire APHA Executive Board here.